In this post we will examine some of the techniques used to build the Payment Upload process. You will see transactions, debraching messages, streaming and using XLANGMessages. 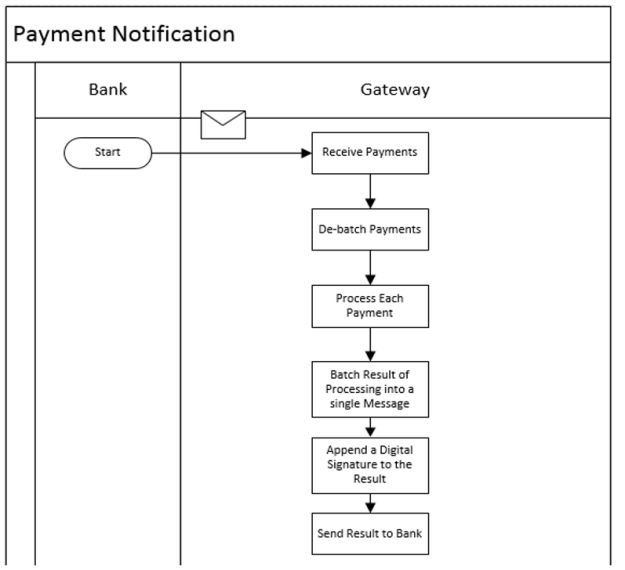 The process itself is simple, however, as I will show in a moment, to implement it you still need to learn a handful of techniques and best practices.

In the previous processes, the bills were uploaded to the bank. In this process, the bank will notify the gateway once a bill is paid through one of the bank channels.

Sometimes you receive a single message which contains multiple records, however, you want to process each record separately. Extracting these records is called debatching.

There are multiple ways to do this in BizTalk. Here I will show you one method using XmlNodelist and IEnumerator. In the next article I will use another method using envelopes.

First take a look at the PaymentNotificationRequest message which is received from the bank. This message has a payment record which has its Min Occurrence set to 1 and Max Occurrence to unlimited. This means that it should contain at least one payment. Each payment is represented by this payment info record which contains a set of information about the payment.

Note that this will be introducing a needless persistence point, and preferably should be avoided. However, as a tradeoff, IEnumerator performs well so the cost of persistence point seems acceptable. But anyway, in the next post I will use a different technique using Envelopes which will also perform well.

Even as third solution, I could have moved the entire debatching logic into a serializable .NET class, and thus eliminated the need of the Atomic scope, but I am not really a big fan of this. As long as I can do the business processing inside the Ox, I always prefer this approach. This keeps my business process at a higher abstraction level, and makes it easier to track and monitor.

So first step is to get hold of the enumerator. In the expression shape I first initialize a new XmlDocument and set it to the message I received and I use the XmlNamespaceManager to set the targetnamespace. I then use Xpath to select the record that contains the collection of payments and assign the result to an XmlNodeList; at this stage I have a nodelist where each node represents a payment record. So now I can iterate and process these records one by one. In order to perform this iteration, I get the IEnumerator from the nodelist:

I will use this enumerator in a loop shape to start the actual processing.

In the next expression shape I call a .NET helper which generates the header of the response message. The idea here, is that I use the Ox to debatch and iterate over the message, however, I use the helper class to process each record; and on the fly build the response. The next section will explain this class and the techniques used to generate the response:

Next I use a Loop shape which uses the enumerator MoveNext method to traverse the XmlNodelist one at a time. Inside the loop shape I use an expression shape (WriteRecord shape): first i get hold of the current node and then again I use the helper component to process this particular record and write a response record for the current node.

This loop will continue until all nodes are iterated and processed by the Helper class.

And finally, after I have finished parsing all payment records I write the footer of the response message (using the WriteFooter shape).

The next construct shape is interesting. Check the enclosed assignment shape: here I could have just asked the .net component to return me an XmlDocument out of the response string I have been building. However, as I explained in my streaming article this is the bad approach. Instead I made the .net component return the message as a stream. In the next section I will explain how this is done.

And now finally, I have the response ready, so I sent it back to the bank using a send shape.

In this section, let’s see the helper class I used to generate the response (XmlHelper project in the VS solution)

First, of course the class is marked as Serializable.

Now, there are 2 core regions, the XmlManipulation and the BizTalk Messaging Manipulation.

The XmlManipulation region is simple. Its purely doing some XML and string manipulation to build up the response.

Now the interesting part is the one about BizTalk messaging. When it comes to passing messages, pass it as XLANGMessage and not XmlDocument. Here we need to send a message from the helper class back to the Ox.

The first method, GetXmlResponseDocument, is the bad practice because its using XmlDocument. This means the message is loaded into memory before being handed to the Ox. I will not use this method; I kept it just to show it as a possible option.

The two methods I will use are GetResponseStream and GetResponseMessageFromStream.

Back in the Ox…now the code in this assignment shape which creates the response makes sense:

Digital signatures are supported natively in BizTalk Server. However, in this process I had a special requirement, which cannot be satisfied by the out of the box features.

To see what I mean, lets take a close look at the outbound message:

It has an extra element to hold a digital signature, and the path of xml portion of the message that is signed. This kind of requirement, cannot be achieved by BizTalk security features.

So, now the process will go as follows: my Ox will generate the response just as I showed you in the previous section. However, just before the message being sent out by the send port, I will use a custom pipeline component that does the signature and appends the signature to the message. And while doing so, I will again stay loyal to the best practice of using streaming.

Note that you need a certificate for applying digital signature. I used makecert tool to create a self-signed certificate and I included it as part of the pipeline component project:

Now examine the code of the pipeline component (VS project “SetNSForMsgPN”):

The we need to build the outgoing message, including the signature:

The SignMessage function is all about cryptography:

Exposing the Service to the Consumer: Using the WCF Service Publishing Wizard

Once the process is ready, we want to expose it to the bank.

Now when you run the process, use the published service to simulate receiving payment notifications:

In the administration console, The request-response receive port was created automatically by the WCF publishing wizard. The WCF adapter points to the WCF service also created by the wizard:

The thing I needed to change, is that instead of the XmlTransmit pipeline, I will use the custom pipeline which contains the custom component:

Next run the console application and send the request to the Ox.

First, verify that the Ox has completed successfully, so from the admin console check the completed Oxs. You should see the process instance. Select the debugger and you should see that the loop was executed twice since you submitted a message with two payments:

However, we know that the response isn’t received yet, because the send port is using the custom pipeline, so I will now step into the code of the signature component: 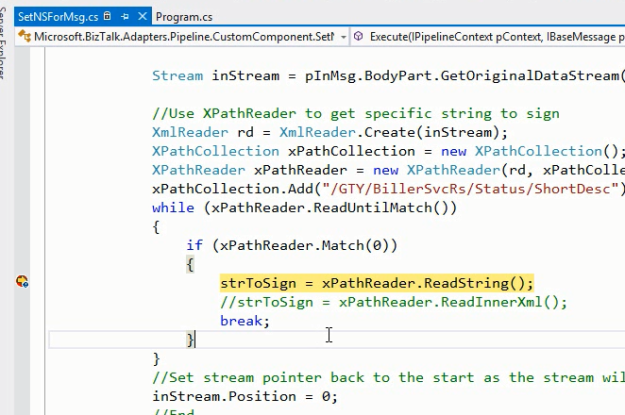 As explained before, first I get the string to sign, then while building the outgoing message, I call the SignMessage function. Inside this function, signature takes place and finally, I return the message back to the console application.