The first process is the Bill Upload Process:

The process is simple:

Now let’s examine some of the functionalities of this process. As you read through the following sections, jump back to VS solution and examine how things are done. Let’s start:

Final thing I want to highlight here, is the way I am creating the email message. I am using a message declared as XmlDocument, then I hard-coded the Xml content of this message. And finally I used one of the system properties promoted by the SMTP adapter, to set the text of the email message.

Now that I have the result back from the bank. I need to inspect this result and store any rejected records in the database; for example for future correction.

For this I have a demo database (which we created when we ran the script), which contains a single table and a single stored procedure. The stored procedure will be called from the Ox, to insert the rejected records.

In order to achieve this, I will use the WCF-SQL LOB adapter. This adapter, like many others, provides the ability to generate request and response schemas from the DB structure. These schemas are then understood by the adapter which performs the required update.

To add these schemas in the solution:

In the VS solution, I have deleted the response schema; in my case, the stored procedure will not be returning any result, so I can delete the response part.

Back in the Orchestration:

So in my process, the gateway sends the bills message to the bank and gets an immediate response. The bank does not want to use any target namespace in their schemas. They had their own reasons for this, and the gateway could no nothing about it.

However, any schema in BizTalk must – or at least should – have a target namespace. To solve this, I ended up creating this Schemas.BillUpload.OutBound project. This project two schemas BillUploadRequest and BillUploadResponse. These are the schemas that are sent and received from the bank These schemas are exactly the same as the ones I defined in the Schemas.BillUpload project; expect that they contain no target namespace.

In the same project, I have two maps:

Now for the xmldisassembler, this is a problem. When it receives the incoming message from the bank, it tries to indetify the type of the message, but finds two schemas of the same type deployed so it fails and raises an error.

To solve this, there are two options:

To see how I created this pipeline, from VS solution see project Pipelines.BillUpload. I have used the XmlDisassembler component and in the document schemas property I selected the schema that I want the message type to resolve to.

So for example, if no messages need to be batched together, or no encryption need to applied, or no demotion is required – in general if no processing is required on outgoing messages – then we can just use the passthrutransmit pipeline, which will give better performance.

So, for example in my BillUploadRqRs port, when sending the bills message out, I can use the passthru transmit pipeline and let the message just flow out with no processing.

To run the sample, create the folder structure to drop messages for the file adapters.

To test the process:

This initiates a new instance of the Ox.

Now, the bills message has been sent to the bank.

To simulate the bank, I have used the HTTP adapter to send the request to an ASP.NET application (BillUploadRqRs in the VS solution). The application accepts the message as HttpRequest, uses XmlTextReader and XmlDocument to read the message content, and then builds up the response using the same rquid extracted from the request. And finally sends the response back as an HttpResponse.

Just recall that what happened now simulated the bank positive acknowledgement that I has received and accepted the bills. And at this stage, the process is waiting for the billconfirmation request message; that is the result of bills processing from the bank.

Before going on, to verify that the process has been running as expected, check the dehydrated Oxs from the admin console:

Since the Ox is waiting to receive a message, the engine has dehydrated the instance instead of keeping it in memory.

You can also check the Ox Debugger and see how the process is actually waiting for the correlated message (i.e. dehydrated): 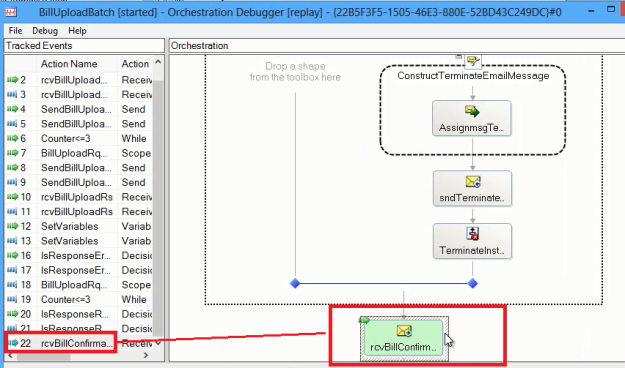 You should then see in the DB table some rejected records inserted. These records are marked as rejected in the ConfirmationRequest message and are mapped to the SQL schema as I showed you before.

In the next article we’ll examine the other part of the bill upload business process – and this failed message routing.