DTC and the 2 Phase Commit Protocol

Atomic Transactions rely on automatic commit and rollback actions. Therefore they need a system to manage these actions implicitly. The name of this system is Transaction Manager.

There are multiple kinds of transaction managers, each used for a certain transaction protocol. For a detailed discussion check my WCF Transactions Pluralsight course. But for the sake of this discussion, we care about the WS-AT protocol, and a particular Transaction Manager – called the Distributed Transaction Coordinator – or DTC.

DTC is familiar to most developers, and is capable of managing transactions across process and machine boundaries.

So DTC has a tough challenge: while the Consisteny, Isolation, and Durability attributes are managed by Resource Managers (RMs), DTC must preserve the atomicity attribute, and it must do this over multiple participants that are most probably distributed over multiple machines.

For example, DTC must make sure that atomicity is maintained over two DB RMs, so “add” and “deduct” operations are either committed as unit, or rolled back as unit.

DTC achieves this task by implementing the 2 Phase Commit Protocol.

The 2 phase protocol, is made up of two phases, which when both complete, TMs can guarantee atomicity. 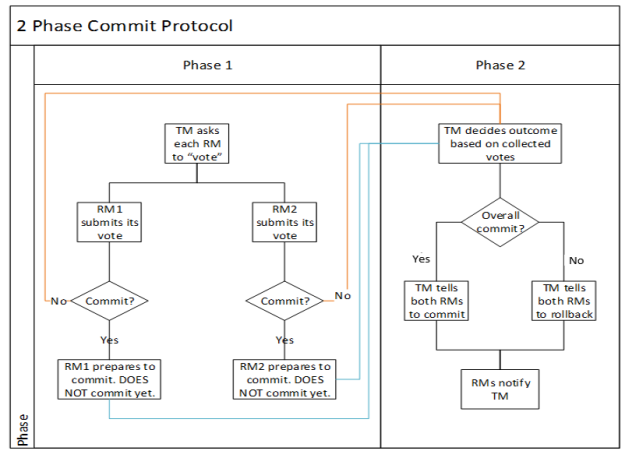 Now let’s see an example on how DTC and the 2 Phase Commit Protocol, play together to manage distributed transactions:

Here we have two resource managers, running on different machines, each machine has its own DTC. The 2 Phase Commit Protocol works as follows:

This entire messaging between DTCs is done using what is called a Transaction Protocol. There are multiple types of transaction protocols; and these are explained in my WCF Transactions Pluralsight course. But for the sake of this discussion, the protocol we’re interested in is the WS-AT.

An activity is made of a set of actions. These actions work together to achieve a certain goal. A general example would be taking an exam activity. To accomplish this activity, actions such as exam reservation and fees payment must be taken. Similarly, an activity would be money transfer: The actions that has to be completed are add and deduct.

Now, the key thing to note here, is that these actions must not work in isolation; rather, their work must be coordinated someway. So there must be a coordination mechanism that provides these actions a common context.

WS-Coordination is the standard that provides such common context to a set of web service actions working towards a common web activity.

WS-Coordination also defines various web services, but here are the most important.

So in summary, WS-Coordination is a generic framework. Lets now see, how these concepts map to WS-AT.

So now you know that WS-Coordination provides a generic framework for coordinating web service actions. You also know that it contains a coordinationcontext construct.

A “Coordination Type” is part of the coordinationcontext and it represents a protocol that is targeted towards a specific specific problem domain. For example, WS-AtomicTransaction defines a coordination type that is used in atomic transaction scenarios.

In other words, WS-AT builds on the generic WS-Coordination framework, to coordinate a set of actions for a specific type of activity, and that is atomic transaction.

WA-AT allows cross machine and platform calls. What this means practically, is that you have services not only running on different machines, but also on different platforms, participating in a single atomic transaction.

This is a coordinationcontext used by WS-AT. I will explain this in the demo, but for now, just notice the CoordinationType element. Its value is set to the WS-AT namespace. So this indicates that its being used to coordinate actions of an atomic transaction.

There are three coordination protocols specified in the WS-AT specification:

The Role of DTC

Final thing I want to say before walking you through a scenario, is that in WS-AT, the Activation, Registration, and Coordinator services I talked about in WS-Coordination, are typically implemented implicitly by a transaction manager, such as the DTC.

So for the sake of WS-AT, you do not need to know how exactly these service work and what messages are exchanged as part of the protocol, unless of course you’re implementing your own TM.

Now I will walk you through a scenario which clarifies the operation of the WS-AT. 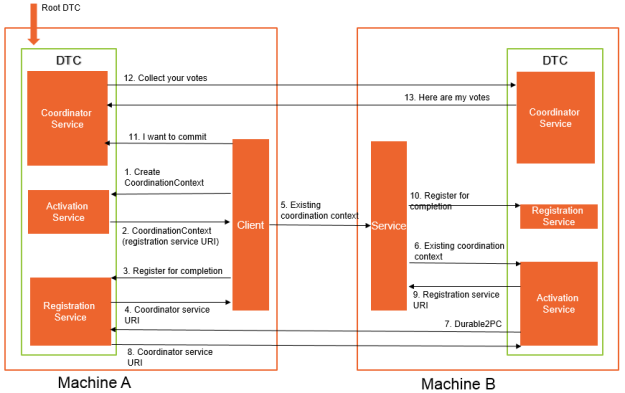 In this example, a client application wants to propagate transaction to a service such that both entities commit or abort their operations as a unit.

The client and the service are running on different machines, so each entity is dealing with a TM, such as DTC.

Transaction flow is how clients propagate atomic transactions to services. For this to happen, the WCF transport binding must support this. The bindings that support transactions are:

There are 3 steps you need to perform to enable transaction flow.

Even for the bindings that support transactions, transaction flow is disabled by default. You have to enable this for the client and the service. This is done by setting the “transactionFlow=”true”” attribute of the <binding> element, as shown in this example:

The second step, is to configure the behavior of the flow on the WCF operation level.

The third step is to do the actual transaction coding for a WCF operation. This means the code that actually initializes the transaction, commits and aborts it.

The following operation shows how to configure transactions by using the OperationBehavior attribute. 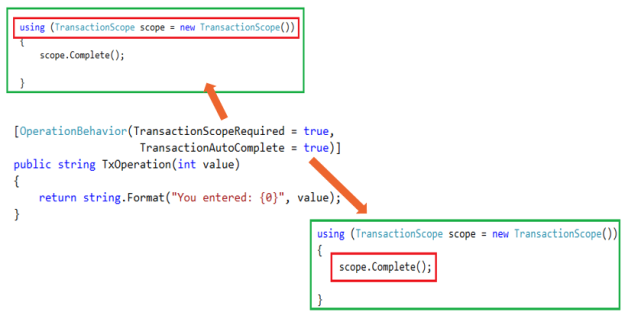 The Add service has the same exact configuration so I won’t spend more time on it. The only difference is in the implementation of the Add operation.

The Add operation also calls a DBOperation to insert a record into an another SQL database; however, what I have done here is throwing an exception, and the Add method returns back to the caller a value to indicate if an exception has been raised.

You need to enable DTC and the WS-AT protocol.

First from the local service, make sure that the Distributed Transaction Coordinator service is running.

And from the Component Services console, from the properties window of the Local DTC, make sure the WS-AT protocol is enabled: 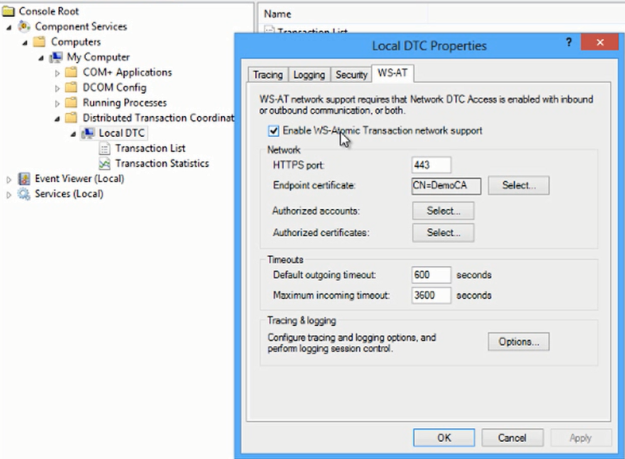 For development and debugging purposes, you will want also to increase the “Default outgoing timeout property” to avoid the transaction being terminated while you are debugging.

However, the important identifier for the sake of this sample is the distributed identifier. Notice that this has no value yet; this indicates that the transaction has not been propagated yet.

Next when you step into the Deduct service operation. Check the distributed identifier again, and this time, notice that it has a value. The reason is that the transaction has been propagated by the client. DTC is now in control and it has assigned a distributed transaction id to manage the entire transaction:

One interesting thing to do, is to check traffic in Fiddler:

Couple of things to note: