Integrated systems have to deal with tough challenges when it comes to secure messaging. If system A is sending a message to system B, this requires the implementation of important security measures. These can be summarized by:

Now lets see how public and private keys fulfill the 3 requirements about privacy, integrity, and authentication.

Consider a case where system A wants to send private data to system B.

That is why, making sure the private key is never exposed is an essential task.

Now again, consider the case where System A wants to send a message for System B where its essential that the message is not tampered with on the wire.

Let me clarify this in an example:

Now, how can system A tell that its being tricked by the evil system Z? Here comes the role of CAs. A CA certifies that a public key is owned by a certain entity.

So in this scenario:

Now the question is, how does system A decide to trust a CA?

To answer this, let me show you an example.

If you use your browser to visit live.com which is secured by SSL. Live.com sends back a certificate to assure you that it’s truly live.com and not some evil site…a similar case to Systems A, B, and Z I explained before; where here your browser is A, and live.com is B: 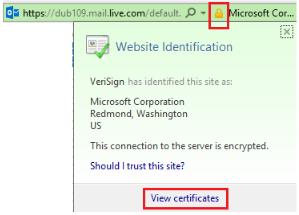 So how does the browser decide, if it should trust the certificate sent by live.com? If you click on the lock icon, and then select view certificates. You will then see the certificate information. In the Certification Path tab, you will see that it has been signed by VeriSign:

VeriSign is a CA which has its own public key installed in the local computer trusted CAs store:

How to generate private keys and certificates?

Finally, lets review briefly how you can get your private and public key pairs.

As a final note, when you see a file with the cer extension, then this is a certificate file – meaning it contains only the public key.

When you see a file with the pfx extension, then this contains the private key.

Some certificates in the store, have the private key attached to them.

For example, a self-signed certificate, will have a private key attached to it. So, when you export it, it will give you the chance to export the private key, which will result in a pfx file:

Another example, would be a SSL certificate which is used to secure your local IIS. This will also have a private key attached to it.

Setting BizTalk to Use Certificates, Encryption, and Signatures

Now that you have the knowledge from the previous section, understanding how BizTalk implements message security, becomes a breeze. In the context of the discussion of the previous section, BizTalk can be System A or System B. Meaning that it can be the system sending encrypted and signed messages, or the system decrypting and verifying these messages.

So the only thing left to be explained, is how to configure BizTalk to use the required certificates and the component that performs the encryption and signing.

Remember, that in real scenarios, the public key will be given to you by the other system.

I used the following command to create a self-signed certificate using makecert tool:

Replace the common name with the fully qualified name of your machine.

This command creates self-signed certificate that can be used for both encryption and signing.

The result is a certificate stored in the Personal Store of the local user – that is the user that is logged into the machine. Now from the Management Console, export the public key portion only of the certificate, and store it some where. You will import it into the proper location in the next steps:

The public key will now simulate the one that you should get from the other system. This time, export the private key and store it somewhere. Again, you will use this key later.

Now, lets see how to configure BizTalk to use these private and public keys.

BizTalk uses two certificate stores; one for each of the private and public keys.

Then the private key you exported in the previous step, must be imported into the personal stores for these users:

The second store used by BizTalk is the Other people certificate store of the local computer. The public key is kept in this store:

if you think about it, you will find it very logical. Recall that this public key is the one you receive from other parties. So its not bound to a particular machine user, so it won’t go into the personal store. And since its coming from “other” parties, its perfect location is the “other” people store.

When BizTalk wants to send an encrypted message to an external system, it must use the public key of that system. Therefore, BizTalk will access the Other People store.

When configuring a send port, select the Certificate tab, and then you can browse all certificates located in the other people store:

One interesting property is the Check revocation list. You can set this property to false in development environments if you’re using a self-signed certificate. Or, you can install the certificate in the trusted CA store.

Now When BizTalk wants to send a signed message, it must use its own private key. Therefore, it will access the personal store of the sending host instance login account.

BizTalk can use one signing certificate per group. Login as the service account of the send host instance, and from the BizTalk group properties, browse the personal store and locate the certificate with the private key:

Again, you will have to create a custom send pipeline with the encoder MIME component. This time you set the Signature Type property to either clearsign or blobsign. I will discuss the difference in a moment:

When BizTalk receives an encrypted message, this means that the other party has encrypted it using the public key that was distributed by BizTalk. So BizTalk needs to access the personal store of the receive host instance account to decrypt and verify the message.

From the properties of the host where the receive handler is running under its instance, from the certificates tab, browse the personal store of the instance account to locate the private key that will be used for decryption:

Now you have to create a custom receive pipeline, with the MIME decoder component:

Now finally, for BizTalk to receive signed messages, this means that the other party has signed it using its own private key, and biztalk must use the public key distributed by the other party to verify the signature. So biztalk will need to access the Other People store.

Just like the case of receiving encrypted messages, you can use the same pipeline configuration. No additional configuration is required:

Party Resolution is a technique to resolve the identity of parties based on their digital signatures. Recall that at the start, I talked about 3 main secure messaging challenges. Message privacy and integrity are covered by encryption and digital signature techniques.

The third concern, which is authentication, can be covered by the Party Resolution technique.

After you provide a name for this party, from the certificates tab, browse the other people store and select the digital certificate that represents this party:

This means that now when BizTalk receives a message signed with a digital signature matching the selected one, a Party ID property indicating the party associated with the certificate, will be written into the message context.

Finally, you need to add the Party Resolution component into the ResolveParty stage in the same receive pipeline you created to receive signed messages:

The only difference is that if your sending an encrypted and signed message, then when configuring the MIME encoder you must select blobsign and you cannot select clearsign: